Current Murrays Sports information regarding COVID-19 virus outbreak, our policy and status at this time. UPDATED 5/25/2020 At this time our warehouse is keeping up with demand, we are making every effort to ship same or next day but it is still possible that Shipping and delivery times may be effected.
Current COVID-19 Notice 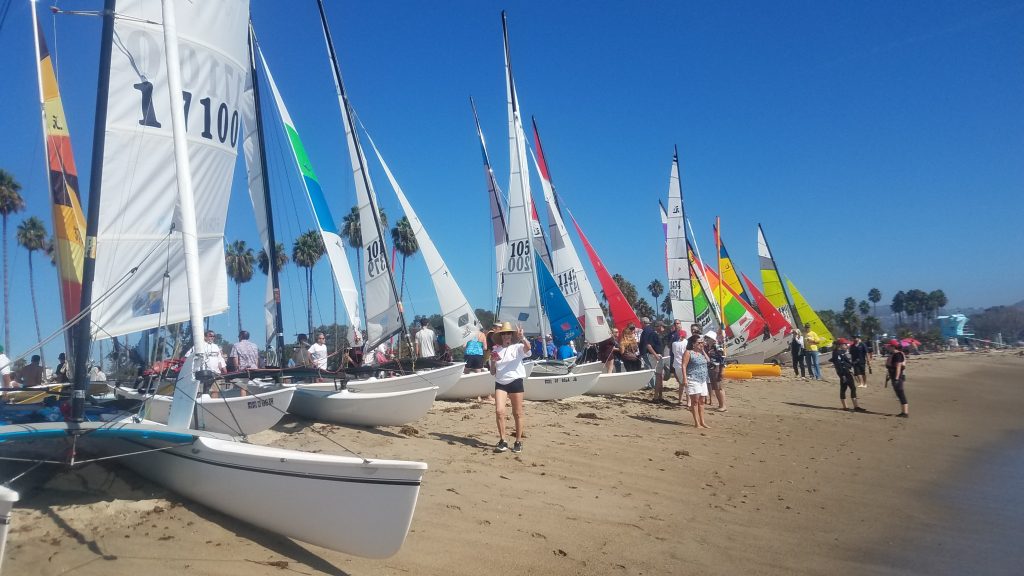 Last month was the 50th Anniversary of Hobiecat. In celebration, Hobiecat Co organized a fun sail/ Race that left from Doheny Beach in Dana point, sailed up the coast and then down the coast towards the beach where the first Hobie was designed in the sand. We decided to head down en force, with representation of original, intermediate and new Hobie sailing generations. Steve Murray loaded up his trusty H18 and called his old friend and original Murrays business partner, Mark Pastic to come out and crew with brilliant Absolute Vodka Sails. Dray Murray and Brooke Gilkey, current President and CFO of Murrays, came out on our restored H16 flying some classic sail colors. Cameron Martin and I brought down my H18 with a vibrant blue tramp, and unfortunately bland white sails.

Cam and Brooke have only been out a handful of times, but have got the bug. Dray and I have been sailing for years, and Steve as many of you know, has been at this for over 40 years. Everyone had a great time! Friday night had the Dana Point Hobie Surf Shop hosting tacos, Hobie Movies and a beautiful new H14 on display. Old friends and acquaintances gathered to share stories and catch up. Saturday morning had sailors descend on the parking lot and beach to gather and prepare for the day’s sailing. H14s, H16s, H18s, H20s, Kayaks and a Tiger came out to cruise through the waters where it all began.

As the morning progressed an ominous fog layer had us guessing whether or not we’d be able to go out. A 12pm postponement meant another chance to mingle and meet new people and check out boats. As the fog lifted, the fleet watched Wayne Schafer take off the beach, standing majestically on the front crossbar of an H16. The rest of us soon followed. In a normal race, the limited visibility and shifty winds would have been frustrating. With the mixed fleet and playful circumstances, sailors got to experience a ballet of boats zipping into and out of the fog. A port tack would let you pass a dozen boats, only to see them off ahead at the next crossing. The forecast had been light, but nice puffs would come streaming through the fog and give some nice double trapped rides towards the next tack.

After rounding the weather mark, the Hobie Power cat could be seen chasing the fleet downwind. The breeze started to lighten up and boats slide down to the last mark boat for the final weather leg. We hugged the shoreline and played in some nice swell and strong lifts as we worked our way back up to the now anchored Hobie Power Cat for the raft up. Wayne’s old H14 marked the finish line and some refreshments were available on the water. The breeze picked up again and cats could be seen reaching back and forth from the harbor mouth and back out to sea, flying a hull and screaming along.

After sailors helped each other get packed up and boats off of the beach, the event was punctuated by a fantastic dinner event, with nods to the sailors, organizers, words from the mayor, live music, and a Hobie themed photo booth. These guys put on a great event to capture and share the traditional Hobie way of life and spirit of the lifestyle we have chosen. Hoping for another 50 years and more great memories.