Current Murrays Sports information regarding COVID-19 virus outbreak, our policy and status at this time. UPDATED 5/25/2020 At this time our warehouse is keeping up with demand, we are making every effort to ship same or next day but it is still possible that Shipping and delivery times may be effected.
Current COVID-19 Notice

For the last 6 years I have made an annual pilgrimage to La Ventana in January to join the The Kiteboarder Magazine for their Freeride Test Week.  At the TKB Test week we get to test an immense amount of the latest gear and learn what stands up to the hype and how it stacks up against the competition.  During this event we get to meet and hear from brand reps, designers, and pros.  They give us the low down on the latest products regarding their goals, updates and performance characteristics.  Then we spend a week testing and reviewing all of the gear from inflatable kites, to foil kites, twin tips, surfboards and foils from most of the major kiteboarding brands.  This year TKB added light wind gear and Surf Wings to the test as well, so we had even more gear on the roster including bigger kites, as well as surf wings and even more foils.
This year we had gear from Airush, Cabrinha, Core, Duotone, F-One, Liquid Force, Naish, North, Flysurfer, Ozone and Slingshot.  It was a daunting amount of gear so we were encouraged to stick to our main disciplines and then try something new.  So I mainly stuck to surfbaords and foils and then tried some foil kites and surf wings to expand my horizons. 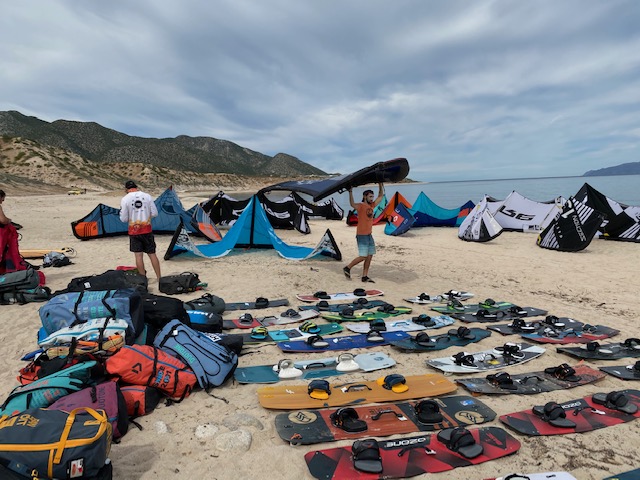 Stand outs kites for me this year were the foil kites: The Flysurfer Soul and the Ozone Hyperlink V2.  Foil kites have several advantages and disadvantages to LEI kites.  The advantages include greater upwind angle of attack, larger wind range, and amazing boosting capabilities with paraglider like hang time.  While disadvantages include complicated bridle system, no structure to hold their shape when not flying, and slower turning speed.  Previously I had tried some foil kites and struggled with them, buy the Soul and Hyperlink are much more user friendly than the foil kites of the past.  Stability is much better, turning speeds are faster, and relaunch is much improved.  Most of the testers were wary of trying the foil kites but once they did the advantages were quickly realized and then they didn’t want to bring the kites back.

The Flysurfer Soul is incredibly stable and fly’s very forward in the window.  With a foil board it feels like the Soul can ride almost straight upwind, and the downwind speed and angle of attack surpass that of an LEI kite as well.  The Soul is the better of the two foil kites upwind, as it adds about 5 degrees to you upwind tack over the Hyperlink.  The Soul has a slower turning speed and it does not generate much power by steering the kite.  It’s real power comes from apparent wind, by edging against the kite and building speed, which is similar to a racing foil kites. The Soul would be my choice for foilers.

The Ozone Hyperlink turns faster and generates more power from steering, making it feel more similar to a LEI kite.  The boosting is sensational, and I think I landed some of the biggest airs of my life while testing this kite.  The Hyperlink feels better for boosting because it does not fly as far forward as the Soul making landing airs more similar to LEI kites.  The Hyperlink would be my choice for people who want cross over capability from foil to twin tip riding.

The people who will enjoy these kites the most are your light wind freeriders who will enjoy the low end on the bigger kite sizes and the increased boosting.  Foilers who are more race oriented will enjoy the upwind/downwind efficiency, added lift during transitions, and a large wind range per kite size.  Neither kite would be recommended for waves, or riders looking for quick turning speeds, or unhooking.

I simply can’t recount everything here but I will give you some highlights, feel free to contact us if you would like any further info.

The Airush Ultra is unchanged from last year, it remains a top performer.  Light bar pressure, amazing stability, very responsive, solid jumping characteristics, full depower.  Core XLite, this kite came as a bit of a surprise, very similar look and feel to the Airush. Differences being that the bar pressure directly relates to the windspeed. Very lite bar pressure in lite winds, and kite still responds well when underpowered.  Then bar pressure grows heavier in higher winds and it felt like it had more lift than the Ultra but not as much hangtime.  Duotone Mono, sadly not a fan of the 2020, the power felt spongey not as crisp as the other kites in the test.  The 2020 Solo came a long way from its previous version.  The 220 is much more powerful than the V3, felt like it was about 1.5m larger than you would expect from a kite its size.  Other improvements are reduced flutter, increased responsiveness, and quicker turning.  All this made the 2020 Solo a great kite.  The Slingshot Ghost is a new entry and had the least canopy flutter of any of these kites.  It has lots of power similar to the Solo.  The Ghost has Slingshot’s signature unrelenting pull, it seems like most Slingshot kites (Rally, Raptor, Ghost, Turbine) don’t depower all the way.  The last 20-30 percent of the power is unescapable, which to me takes the Ghost out of the foil range and makes it a light wind freeride kite as it likes to jump and soar.

The Edge soars almost effortlessly for big floaty boosts, the Orbit and XR6 are a bit quicker and provide a quicker vertical boost, and the Bandit doesn’t feel as overly aggressive as pervious years but still is an absolute rocket ship.

The Stoke was a new entry, it’s a low aspect powerhouse. Lots of power, pivotal turning, easy access but some solid performance characteristics.  The Pivot, Evo, Switchblade and Dice all performed to expectations. 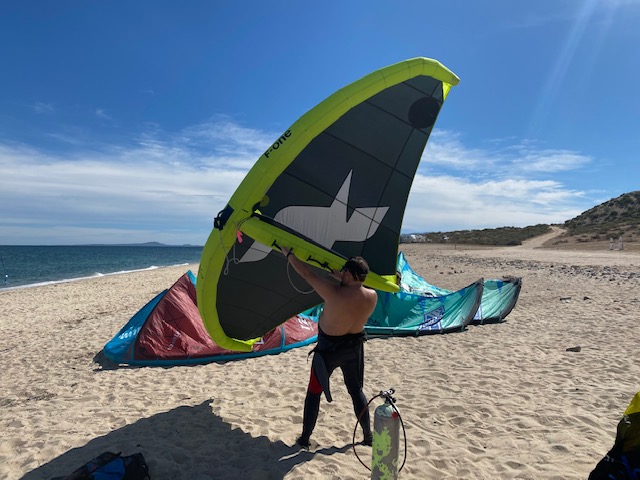 Surf Wings is a new category in the test and it was new to all the testers. The TKB staff, Brendon, India and Alexis meanwhile were all frothing on the surf wings and Winging was all they wanted to do.  While the rest of us looked on with interest paired with concern, as we were not sure how well we would do and if it was as fun as they were trying to make it seem.  When the kites came out all the testers forgot about the wings and dove straight for the kites.  So it wasn’t until the end of the week after we got some encouragement and instruction from Slingshot’s Wyatt Miller and Reed Brady that the testers stepped up to the plate.  Like lemmings we all stood in line to watch and learn from each other’s attempts.  The successes were short, the walk of shame is back, but the wings never sat on the beach long and all the testers came back with smiles on their faces.

After talking to all the reps it seams that weight, power and balance were the characteristics to judge wings by.  The F-One Swing, with it’s deep camber in the canopy, takes the powerhouse award.  Ozone takes the lightweight award and I was not a good judge of balance as I was just trying to stand on the board, pump the wing and board for all I was worth and sadly never got onto the foil.  Pro tips I that I was given were to hold the wing in front of you to go upwind and riding overpowered is recommended for learning as wings are very easy to depower. 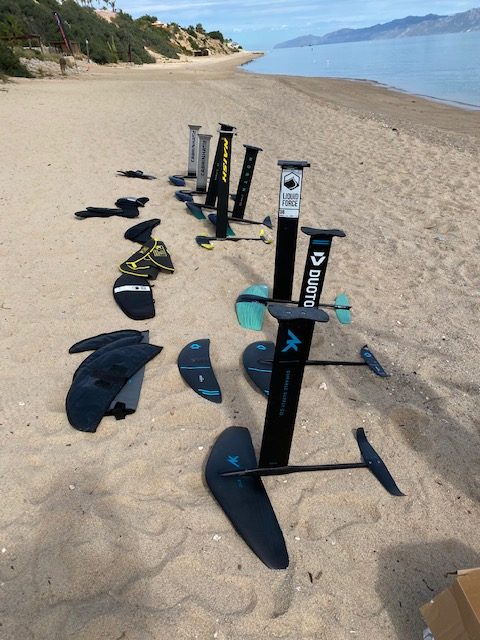 Most versatile: Cabrinha Auto Pilot as it has enough volume to surf on as well.

The Sci-Fly is quite thin and builds speed quickly, it is quite comfortable at top end speeds.  It performed great in the chop, it edges very similar feeling to a twin tip.  It grea for powered up riding.  It’s low volume and small sizes make it super light and agile, great for jumping.  The Mitu can do anything from down the line surfing to freestyle and felt the most rounded of all the boards.  The Duotone Pro-Whip stands out for favorite for its build quality and its deep double concave in the base which makes it track really well and helps disperse the impact on landings.  The Pro Whip features a more rounded outline this year making it more versatile for carving as well while retaining its great freestyle characteristics.  Sadly the Core boards and the F-One Slice were just really big and the Cabrinha’s didn’t  come with traction so we smeared the little wax we had on there, so they under performed due to those issues.  While the Wam and the Tyrant were just out of their elements. 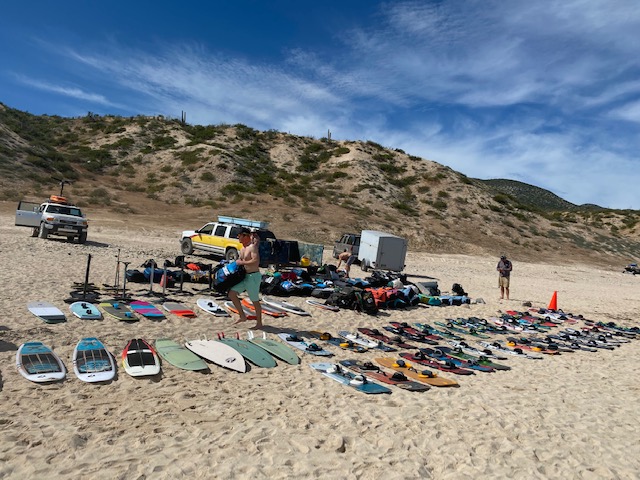 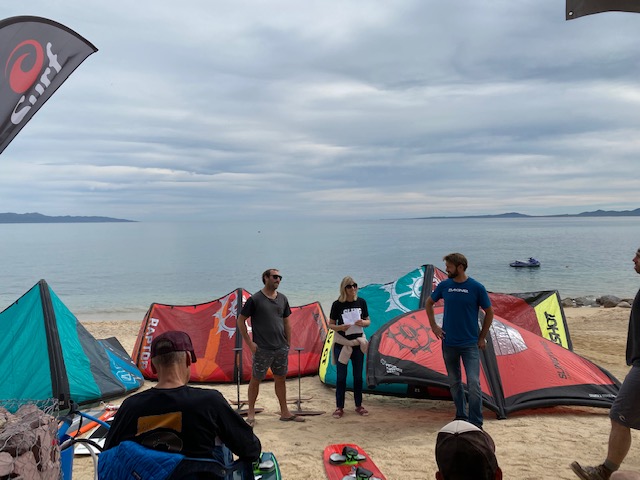 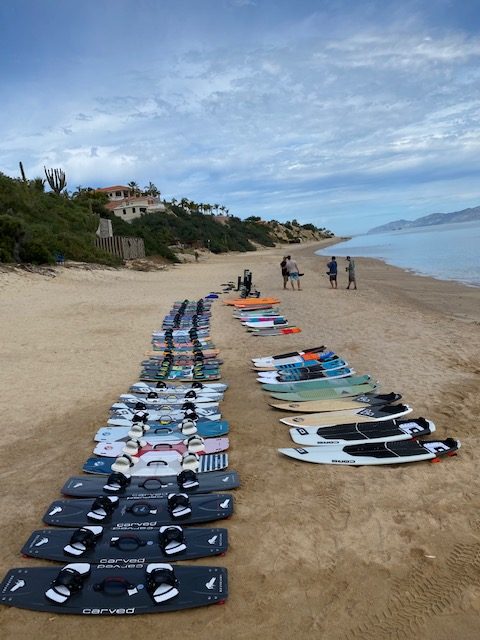 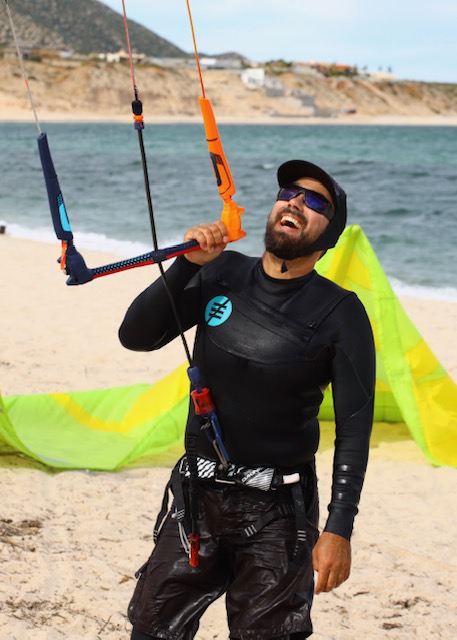 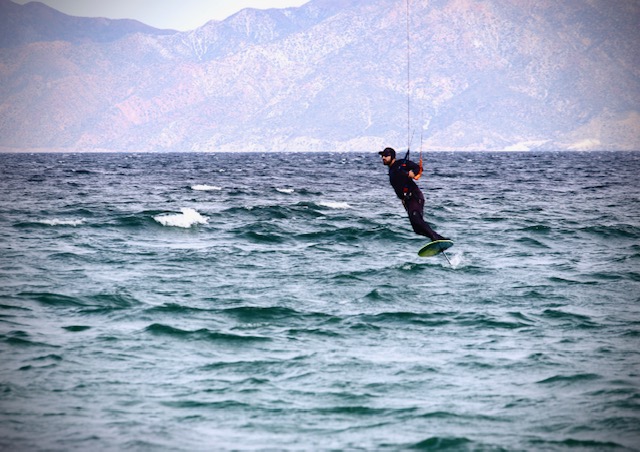